The lapidarium was created in the 1970’s to bring together the many stones scattered around the Priory. This now constitutes the best collection of medieval and earlier sculpture in West Cumbria, and one of the best in Cumbria. The grave slabs show a variety of styles, and as was common, used images to convey whom they commemorate. Each stone tells a tale – you must interpret it. 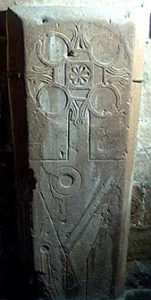 Shows an elaborate version of a “bracelet head” (the bracelets look like horsehoes), with at the centre, a six-petalled flower. The slab has been re-used at a later date and a much cruder design superimposed. This latter is a triangular shield with a roundel and a diagonal bar, apparently carved over a faint lozenge pattern. Below and left of the shield is a pair of shears. This could indicate a farmer of some wealth, based upon sheep. The slab is chamfered.

This has a primitive and irregular bracelet cross, with looped objects, which have been identified as stirrups, in the two upper quadrants of the head centre. Below, a bowman stands on the left of the shaft, with on the right a sword. The bowman, has a quiver slung over his shoulder. This stone was moved from the Lady Chapel. 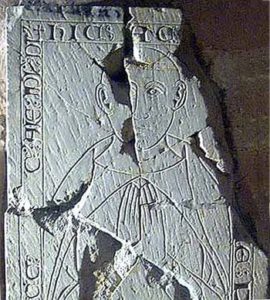 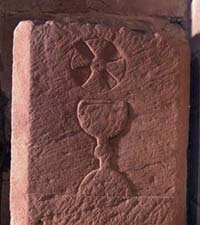 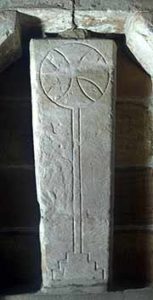 A slab with cross head formed by four sunk quadrants within a circle, with a cross pate at the centre; on the left of the incised cross shaft is a clasped book, possibly signifying the Gospels. 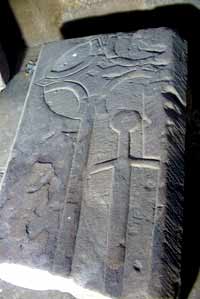 Upper part of a small slab with a cross head formed by four sunk quadrants within a circle, with lozenge-shaped buds breaking the circle. On the right of the cross shaft, carved in relief within a sunk panel, is a sword. The stone is chamfered.

This is the oldest carved lettering in the Parish. Part of an inscribed slab, there is a raised roll (perhaps the shaft of a cross) between two lines of inscription, which face in opposite directions. There is evidence of elaborate decoration on the bottom side (below). It commemorates Walterus de Hualton (this would be High Walton which is a farmstead up the valley), who died in May 1281. 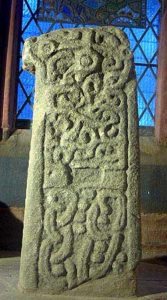 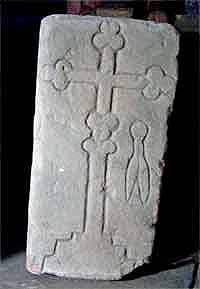 A small slab, complete, with incised design. There is a straight-armed cross with trefoiled terminals, with shears on the right and a stepped base. 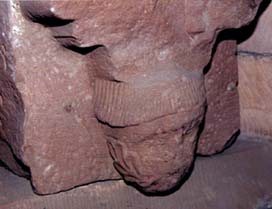 This is an interesting combination of the secular fertility symbol of the “Green Man” (signified by the oak leaves in his mouth), and a monk’s head (indicated by the tonsure). 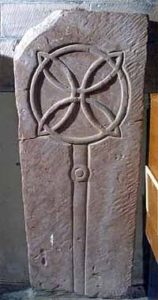 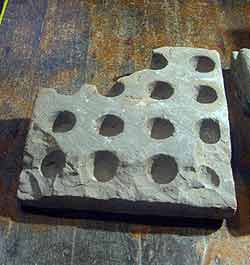 This is from Calder Abbey, a Cistercian House in the valley of the Calder about 7 miles south of here. The Abbey is in ruins, and not open to the public, so the stone is exhibited here. The stone was used for lighting. The hollows would be filled with oil, and lighted tapers would float in them. There would be several of these to give light, and a little heat, through the cold hours of the night services.

Update; April 2005. The stone has been returned to Calder Abbey, but its image is still reproduced here for reference. 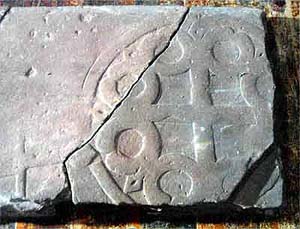 This stone is from Irton, about 15 miles south of here. It formerly lay in Irton church, where it was linked to Adam de Yrton who travelled to the Holy Land c.1100. When Irton church was rebuilt in 1856 it was taken to Irton Hall, and was later presented to Distington Museum in 1872. In the early 1980s it was transferred to Whitehaven Museum, where it was stored. Irton church expressed no interest in its return, so it is now at St Bees in storage in the undercroft.

The head is a straight-armed cross within of a ring of eight bracelets, with pointed buds, rising from a stepped base with a trefoiled arch beneath. On the right of the shaft are a sword, set slightly diagonally so as to allow for another object, which appears to be a purse or satchel, between it and the shaft. The emblem may be a pilgrims “scrip” or wallet. Its use may imply that the deceased had made a pilgrimage, which would tie in with the ascription to Adam de Yrton, although its date would seem to be no earlier than the 13th century, on the strength of the trefoiled arch base.