Canon Richard Parkinson, a journalist, writer and clergyman, who was Vicar of St Bees and a Principal of the St Bees Theological College, was a friend of Wordsworth’s. References to his visits to Wordsworth can be found here. Wordsworth would have often travelled on the steam packet to Whitehaven. 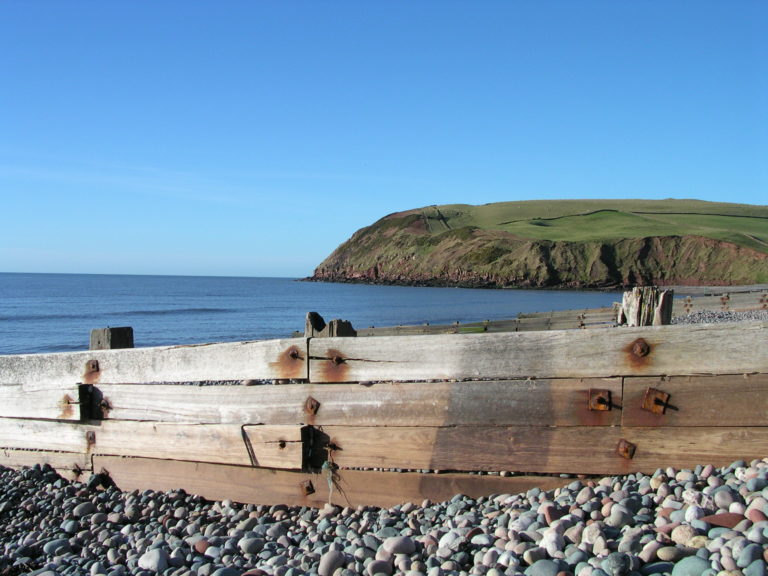 STANZAS SUGGESTED IN A STEAMBOAT OFF SAINT BEES' HEADS, ON THE COAST OF CUMBERLAND.

If life were slumber on a bed of down,
Toil unimposed, vicissitude unknown,
Sad were our lot: no hunter of the hare
Exults like him whose javelin from the lair
Has roused the lion; no one plucks the rose,
Whose proffered beauty in safe shelter blows
‘Mid a trim garden’s summer luxuries,
With joy like his who climbs, on hands and knees,
For some rare plant, yon Headland of St. Bees.

This independence upon oar and sail,
This new indifference to breeze or gale,
This straight-lined progress, furrowing a flat lea,
And regular as if locked in certainty–
Depress the hours. Up, Spirit of the storm!
That Courage may find something to perform;
That Fortitude, whose blood disdains to freeze
At Danger’s bidding, may confront the seas,
Firm as the towering Headlands of St. Bees.

Dread cliff of Baruth! ‘that’ wild wish may sleep,
Bold as if men and creatures of the Deep
Breathed the same element; too many wrecks
Have struck thy sides, too many ghastly decks
Hast thou looked down upon, that such a thought
Should here be welcome, and in verse enwrought:
With thy stern aspect better far agrees
Utterance of thanks that we have past with ease,
As millions thus shall do, the Headlands of St. Bees.

Yet, while each useful Art augments her store,
What boots the gain if Nature should lose more?
And Wisdom, as she holds a Christian place
In man’s intelligence sublimed by grace?
When Bega sought of yore the Cumbrian coast,
Tempestuous winds her holy errand crossed:
She knelt in prayer–the waves their wrath appease;
And, from her vow well weighed in Heaven’s decrees,
Rose, where she touched the strand, the Chantry of St. Bees.

“Cruel of heart were they, bloody of hand,”
Who in these Wilds then struggled for command;
The strong were merciless, without hope the weak;
Till this bright Stranger came, fair as daybreak,
And as a cresset true that darts its length
Of beamy lustre from a tower of strength;
Guiding the mariner through troubled seas,
And cheering oft his peaceful reveries,
Like the fixed Light that crowns yon Headland of St. Bees.

To aid the Votaress, miracles believed
Wrought in men’s minds, like miracles achieved;
So piety took root; and Song might tell
What humanizing virtues near her cell
Sprang up, and spread their fragrance wide around;
How savage bosoms melted at the sound
Of gospel-truth enchained in harmonies
Wafted o’er waves, or creeping through close trees,
From her religious Mansion of St. Bees.

When her sweet Voice, that instrument of love,
Was glorified, and took its place, above
The silent stars, among the angelic quire,
Her chantry blazed with sacrilegious fire,
And perished utterly; but her good deeds
Had sown the spot, that witnessed them, with seeds
Which lay in earth expectant, till a breeze
With quickening impulse answered their mute pleas,
And lo! a ‘statlier’ pile, the Abbey of St. Bees.

There are the naked clothed, the hungry fed;
And Charity extendeth to the dead
Her intercessions made for the soul’s rest
Of tardy penitents; or for the best
Among the good (when love might else have slept,
Sickened, or died) in pious memory kept.
Thanks to the austere and simple Devotees,
Who, to that service bound by venial fees,
Keep watch before the altars of St. Bees.

Are not, in sooth, their Requiem’s sacred ties
Woven out of passion’s sharpest agonies,
Subdued, composed, and formalized by art,
To fix a wiser sorrow in the heart?
The prayer for them whose hour is past away
Says to the Living, profit while ye may!
A little part, and that the worst, he sees
Who thinks that priestly cunning holds the keys
That best unlock the secrets of St. Bees.

Conscience, the timid being’s inmost light,
Hope of the dawn and solace of the night,
Cheers these Recluses with a steady ray
In many an hour when judgment goes astray.
Ah! scorn not hastily their rule who try
Earth to despise, and flesh to mortify;
Consume with zeal, in winged ecstasies
Of prayer and praise forget their rosaries,
Nor hear the loudest surges of St. Bees.

Yet none so prompt to succour and protect
The forlorn traveller, or sailor wrecked
On the bare coast; nor do they grudge the boon
Which staff and cockle hat and sandal shoon
Claim for the pilgrim: and, though chidings sharp
May sometimes greet the strolling minstrel’s harp,
It is not then when, swept with sportive ease,
It charms a feast-day throng of all degrees,
Brightening the archway of revered St. Bees.

How did the cliffs and echoing hills rejoice 0
What time the Benedictine Brethren’s voice,
Imploring, or commanding with meet pride,
Summoned the Chiefs to lay their feuds aside,
And under one blest ensign serve the Lord
In Palestine. Advance, indignant Sword!
Flaming till thou from Panym hands release
That Tomb, dread centre of all sanctities
Nursed in the quiet Abbey of St. Bees.

But look we now to them whose minds from far
Follow the fortunes which they may not share.
While in Judea Fancy loves to roam,
She helps to make a Holy-land at home:
The Star of Bethlehem from its sphere invites
To sound the crystal depth of maiden rights;
And wedded Life, through scriptural mysteries,
Heavenward ascends with all her charities,
Taught by the hooded Celibates of St. Bees.

Nor be it e’er forgotten how, by skill
Of cloistered Architects, free their souls to fill
With love of God, throughout the Land were raised
Churches, on whose symbolic beauty gazed
Peasant and mail-clad Chief with pious awe;
As at this day men seeing what they saw,
Or the bare wreck of faith’s solemnities,
Aspire to more than earthly destinies;
Witness yon Pile that greets us from St. Bees.

Yet more; around those Churches, gathered Towns
Safe from the feudal Castle’s haughty frowns;
Peaceful abodes, where Justice might uphold
Her scales with even hand, and culture mould
The heart to pity, train the mind in care
For rules of life, sound as the Time could bear.
Nor dost thou fail, thro’ abject love of ease,
Or hindrance raised by sordid purposes,
To bear thy part in this good work, St. Bees.

Who with the ploughshare clove the barren moors,
And to green meadows changed the swampy shores?
Thinned the rank woods; and for the cheerful grange
Made room, where wolf and boar were used to range?
Who taught, and showed by deeds, that gentler chains
Should bind the vassal to his lord’s domains?–
The thoughtful Monks, intent their God to please,
For Christ’s dear sake, by human sympathies
Poured from the bosom of thy Church, St. Bees!

But all availed not; by a mandate given
Through lawless will the Brotherhood was driven
Forth from their cells; their ancient House laid low
In Reformation’s sweeping overthrow.
But now once more the local Heart revives,
The inextinguishable Spirit strives.
Oh may that Power who hushed the stormy seas,
And cleared a way for the first Votaries,
Prosper the new-born College of St. Bees!

Alas! the Genius of our age, from Schools
Less humble, draws her lessons, aims, and rules.
To Prowess guided by her insight keen
Matter and Spirit are as one Machine;
Boastful Idolatress of formal skill
She in her own would merge the eternal will:
Better, if Reason’s triumphs match with these,
Her flight before the bold credulities
That furthered the first teaching of St. Bees.