The closure of the College in 1895 marked a new era in the history of the Priory. Gone were the students, leaving the Old and New College Halls as the only tangible reminders.

The Rev. Alexander inherited a project that had been started by one of the College lecturers, Although the existing organ had been installed as recently as 1868, it was felt a larger instrument was needed, and the job was entrusted to “Father” Henry Willis, the master organ builder of the Victorian era. Willis had rebuilt most of the cathedral organs in England, and his reputation as a builder of organs in the Romantic style was unsurpassed. This was quite a catch for St. Bees, and the outcome was eagerly awaited.

The project evidently caught Willis’ fancy, and although approaching his 80th year, he traveled up from London to view the Priory and decided to supervise personally the construction and final tuning. This was probably due to his satisfaction with the grand tonal scheme drawn up by Francis Livesey, the organist and Choirmaster, and George Dixon, an amateur organ designer living in St. Bees. Certainly Willis seems to have made this organ his “swan song”. He included the stopped diapason that he had originally built for his first cathedral organ – Gloucester in 1847- and also the 16ft pedal open bass formerly in the Lincoln cathedral organ of 1826 by W. Allen.

The organ case, completed in 1908, is a marvelous example of carving in English oak by the workshop of Ralph Hedley of Newcastle. The pipes at the front are the 16ft open metal diapasons. The organ was opened with a recital on Tuesday May 16th 1899, given by Dr T.H. Collinson of St. Mary’s Cathedral, Edinburgh. Willis died in 1901, but the St. Bees organ remains as a fitting memorial to a half-century of brilliant work. The organ is one of the finest Victorian Romantic organs in the country. See the Priory Organ History for more details. 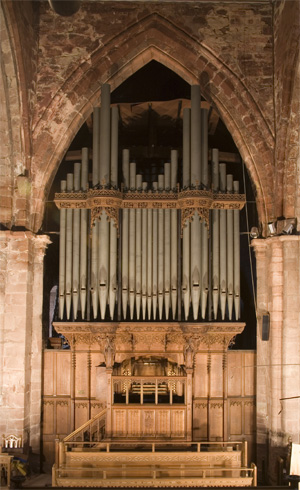 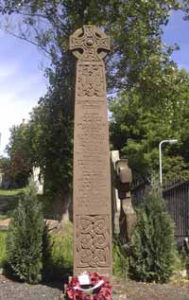 Like many Parishes in the country, the First World War hit the community hard. Over 100 St. Bees men served in the war, and 26 gave their lives, several from the choir. The names of the fallen are recorded on the village War Memorial which is next to the lych gate in the graveyard. Designed by W. G. Collingwood, John Ruskin’s secretary, the memorial is a fine example of modern sculpture in the Northumbrian style, and takes motifs from the old cross in the centre of the graveyard. Note there are two war memorials in St. Bees.

In 1928 the lych gate itself was built and the graveyard extended further westward. This process has continued to the present day, so that the Priory has one of the largest graveyards in the Diocese.

The great era of restoration had been in the 1800’s, and little was changed in the 20th Century. However, the Butterfield spire, with its distinct Romanesque style, had long attracted comment for its uncompromisingly French appearance. It was also becoming a maintenance headache. In 1953 the bells were taken out for re-tuning by Gillett and Johnston of Croydon, and the opportunity was taken to remove the Butterfield spire and remodel the tower to give the more practical design you see today.The wind vane dating from the late 1980s, which carried the figure of a monk pointing to the wind, was replaced with an identical one in 2007 during the roof renovation work. 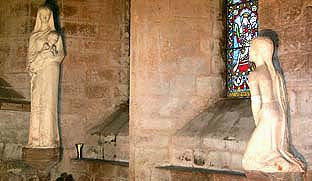 The Lady Chapel in the medieval north transept was created in 1955 and two statues were placed on the existing medieval pedestals. They are known as “The Vision of St. Bega”. In memory of Barbara Wright and George Dixon, they were sculpted by Josefina de Vasconcellos. This chapel still retains its medieval character, which the statues complete.

Visit of the Archbishop of Canterbury

It is recorded that Archbishop Thurstan visited the Priory in the early 1100’s to dedicate it, but it was not until 1983 that an Archbishop of Canterbury paid a repeat visit. The occasion was the 400th Anniversary of the founding of St. Bees School by Edmund Grindal, a native of St. Bees and Archbishop of Canterbury in the reign of Elizabeth I. A large combined service was held in the Priory and a commemorative stone blessed. This is now set in the east wall of St. Bees School Chapel.

A long-standing complaint about the Priory for many years was that it lacked a centre aisle due to the centre block of pews that had been installed in the restoration of 1820. In the early 1960s the nave floor was dug up and under floor heating installed. A centre aisle was created by swapping the nave pews with those in the side aisles. Since then the comfort factor has been further improved by pew heating and carpeting of the Centre Aisle. 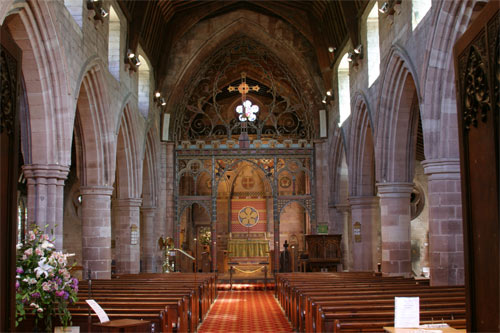