Called the “Free Grammar School”, the School was to provide education for boys born in Cumberland and Westmorland, who were able to pass an educational test. The School would be administered by seven governors, one of whom was to be the provost of Queen’s College, Oxford, who would appoint the Schoolmaster at a salary of £20 per year. The term “free” meant it was free of Church juristriction – as opposed to many contemporary schools which were often attached to Cathedrals or Colleges – not that it cost nothing to attend. The school was to be built at a cost of £366.3s.4d. and endowed with annual revenues of £50.

Although the foundation was to be sometimes at risk in its early years a school building had been erected by 1588 and a tradition of learning had begun which has continued without a break for four centuries.

The original Foundation block of 1587-88. This forms the left part of the present quadrangle. The blocked up doorway of 1587 can be seen in the gap between the lower windows. 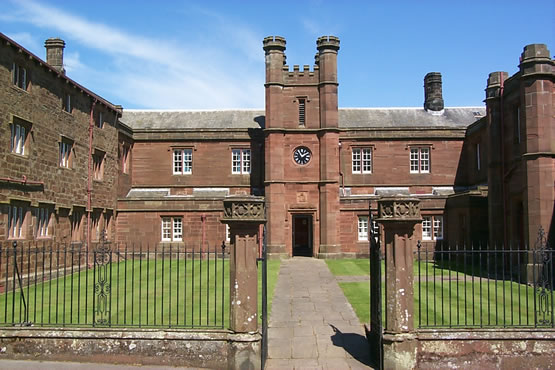