St Bees Man was dicovered in 1981, in the third year of a series of archaeological investigations at St Bees by Leicester university, when attention had been turned to the ruined chancel aisle on the south east corner of St Bees Priory.

The chancel aisle is a ruin today and probably collapsed before the dissolution of the Benedictine monastery due to unstable ground. (See diagram at bottom of page). The evidence for this is the blocked up arches in the Buck’s engraving of 1739. If the ruin had been created after the dissolution, the arches would not have been filled up.

Within a short time a number of discoveries were made; the floor level of the chancel aisle, various pottery from the 14th century, and burials from before and after the aisle was built. All these burial remains, with one notable exception, were skeletons.

The exception was the discovery in a walled vault of a lead coffin.

After removal, the coffin was carefully cut around the edge and opened up to reveal a shroud obviously wrapped round a human body. This was to be a unique find in modern times. The coffin was immediately closed up, and was taken to the chilled storage in the Morgue at the West Cumberland Hospital to preserve the body.

There followed a period of feverish activity during which emergency funds were raised from the Department of the Environment to engage the services of Dr Eddie Tapp, a paleopathologist from Preston who had done much work on Egyptian mummies, who performed a forensic autopsy on the St Bees Man.

The examination of the body

The examination which took place over the next two days made some remarkable discoveries, all linked to the amazing degree of preservation of the body.

The Body had been wrapped in linen impregnated with some resinous substance and this, plus other factors, had resulted in adipocere, a natural process which occurs under certain conditions of cold and dampness; though rarely to this extent. This had preserved the body organs and tissues in such detail that it was possible to determine not only his cause of death, but also his state of general health prior to the injuries that killed him. Details of the findings are described in Dr Todd’s historical paper on this site.

The skin, where not stained by the wrapping cloth was still pinkish. The tissues when cut, were very similar to the appearance seen in similar examinations of the recently deceased, and in the chest cavity, liquid blood was found. The anatomical structures of organs such as the heart, liver and kidneys was completely preserved. Indeed, the entire body, apart from the brain was, anatomically though not microscopically at cellular level, as it would be found in a recently dead body, with no signs of any deterioration.

How did he die?

Clearly he died a violent death, but whether it was in battle or in a tournament of some sort cannot be known. Also, given the trouble that had been taken to preserve the body, it is likely that he died away from St Bees and was transported back here for burial. The immediate cause of death was almost certainly a haemo-pneumothorax due to fractured ribs. Basically this means that one of his lungs had collapsed due to them being punctured by the broken ribs. This led to air and blood getting into the chest cavity and compressing the lung so that it couldn’t expand. He also had a fractured right jaw, fracture of the hyod (a small bone in the larynx or voice box). Incidental health problems were a severe dental abscess due to a botched tooth removal, and a very large hydrocoele.

Following the examination, he was reverently re-buried at the chancel aisle where he originally had lain.

That unfortunately we did not not definitely know then, though John & Mary Todd conducted extensive research into trying to establish his identity, and arrived at several candidates.

We knew he was a man aged about 40, plus or minus 5 years, who was buried sometime between 1290 and 1500. It was thought he was possibly married and a layman, as beside him lay the skeleton of a woman – though it could of course been a female relative. The location of the vault implies he was a person of some importance – a local lord probably. Possible families include the Curwen, Fleming, Huddlestone and Harrington families. Suggestions include Robert of Harrington and Anthony de Lucy. The evidence for these various suggestions can be found in Dr Todd’s paper.

In the intervening 30 years there have been considerable advances in science, and combined with other historical evidence that has come to light, he is thought to be almost certainly Anthony de Lucy, who died on a teutonic crusade in 1368.

There is an update on the latest historical discoveries here 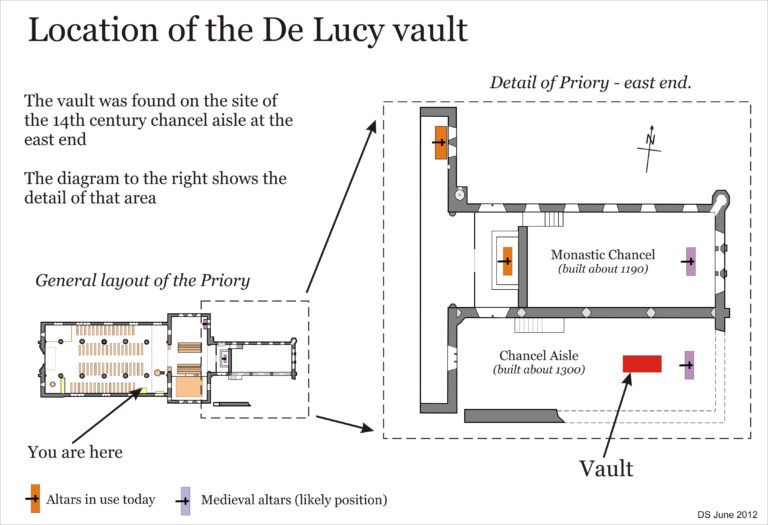 The most detailed TV programme is St Bees Knight, an hour long documentary in the Medieval Dead series by Yesterday TV channel

Discovery TV’s “Frozen in Time II – Mummies Forever” has been shown both in America and Britain. It was filmed by Pangolin Pictures, New York and includes an item about St Bees Man.