The St. Bees Old Millhillians was founded in 1990 with David Smith as the chairman. Tragically David died in 1991, and Michael Berry then became Chairman. Every year since there has been the AGM of the “St. Bees Old MillHillians”, in the bar of the Queen’s Hotel, where a grand framed picture, presented by them, bears testimony to its use as the “Master’s Common Room”. Several villagers are honorary Old MillHillians.

The first re-union was in October 1989, to celebrate the 50th anniversary of the school’s arrival. Initial contact had been made by David Smith to the Parish Council, whose chairman, Derek Sim, had been a village member of the St. Bees Home guard with MillHillians. A service in the Priory and a grand dinner was held, plus lunch in the Seacote Ballroom – the old school dining room. 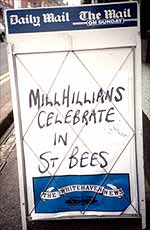 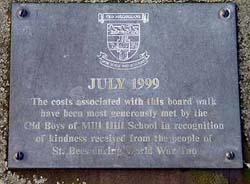 One of the St. Bees Old Millhillians’ projects has been assisting the Priory Paddock environmental area. 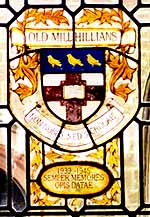 In 197 a memorial window was placed in St. Bees School Chapel to commemorate the evacuation of the school to St. Bees. 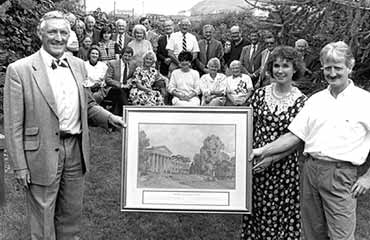 Michael Berry present a Sturgeon print to the Geoff and Kay Steele, previous hosts at the Queen’s Hotel. This has pride of place over the bar fireplace.

July 1995 saw the 50th anniversary of the school leaving St. Bees. 47 OM’s were present.
The 1995 re-union – Pictured outside the St. Bees School Chapel 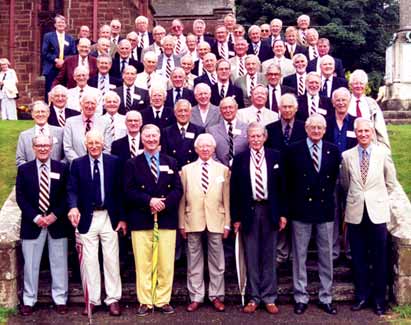 August 1999 saw the biggest re-union – 60 years since the school first arrived. There was a grand dinner at the Seacote with 110 present, and a service in the Priory. Mill Hill School First XI cricket team travelled north with the present headmaster, to see them beat St. Bees School first team.