A shipwreck from Victorian times has left us its own memorial – though its story is now largely forgotten. In our churchyard is an imposing stone monument. Upon its plinth rest a number of very old sea-shells. Beneath it, in three rows of four, lie the remains of twelve mariners: eleven Italian seamen and an English deep-sea pilot. We do not know the names of the eleven, but the twelfth was Henry Legg, from Falmouth in Cornwall.

The story starts with an eleven year old boy, John McGill, of Braystones. He lived at the railway station (his mother was station mistress) and from the station there is normally a fine view of the sea. On the Sunday night in question, however, it was snowing heavily, and to make matters worse a gale was blowing off the sea. Suddenly, through the gloom, John saw a ship’s mast-light, and he was sure it was too close to the shore. But when his mother looked there was nothing to be seen, and she concluded that he must have been mistaken.

Next morning, though, it was obvious he had been right. Below the station wreckage lined the shore, and when Mrs McGill rushed down to it she saw there were dead bodies among the rocks. Some railwaymen arrived and helped her search, and between them they located eight bodies. After the police and the customs officials had been called, the bodies were taken along the railway to St. Bees.

When bodies are found there has to be an enquiry or “inquest”. Twelve members of the public are summoned to investigate the deaths and see if anyone is to blame. The jury for this inquest was made up of notable village figures such as the village chemist John Reay, market gardener William Blythe, and Jonathan Burnyeat the postman. They met at the Royal Hotel (now ‘Grindal House’, opposite the station) on January 14th, which in 1879 was a Tuesday.

The eight bodies, still in the clothes in which they were found, were laid out on straw in a stable behind the hotel. Early in the proceedings the jurors were taken to see them. This cannot have been a pleasant task, for some of the bodies were terribly mutilated. One had no arms or legs, most of its head was missing, and it had been completely disembowelled. The postman was unable to continue after seeing it.

One of the bodies – Henry Legg’s – was identified from his Pilot’s Certificate, kept safe in a tin in his pocket. The others could only be given numbers. The ship had been the sailing barque “Luigi Olivari”, taking grain from Philadelphia to Silloth.

Wednesday the 15th was a solemn day in St. Bees. All our shops stayed closed, as a sign of respect for the dead. The eight bodies from the inquest, and another which had been found afterwards, were placed in coffins and carried to the churchyard, where many villagers were gathered to hear the burial service read over them. Although the coffins were not taken into the church, the villagers went inside afterwards, where according to the newspaper “a hymn bearing on the perils of the deep was sung, with a feeling in keeping with the mournful ceremony”.

There was less respect, however, on the beach. As clothes and other goods came in from the wreck, local people scrambled to acquire them. But stealing from wrecks is illegal. Police Constable Armstrong from St. Bees did his best, but he had to call in policemen from four neighbouring places before he could actually stop it!

Over the next few days three more bodies were found – one on St. Bees Beach and two at Fleswick Bay. These were buried with the others. If, as was believed, there were fourteen or fifteen in the crew of the “Luigi Olivari”, there must have been other bodies which were never discovered.

A week after the funeral the salvage from the wreck was auctioned on the beach. Dealers came from as far away as Barrow and Liverpool, and bidding was brisk. Timbers, chains, anchors and other sundries, and a good deal of the original cargo of grain, together fetched about £450.

And how do the shells come to be on the grave? We don’t know. Elderly people in the village today remember the shells from their childhood, but how they came to be there in the first place is totally forgotten. 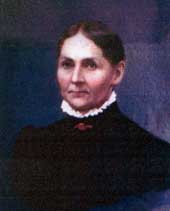 The Braystones station mistress was much respected in seafaring circles for the help she gave to seamen wrecked on our shore. Her descendants still own a bible given to her by the captain of another ship, lost in the same place two years later.Her son John (or Jack) McGill, who first saw the ship near the rocks, and was decsribed in the papers as “a bright little lad”, went to sea himself when he grew up. He was drowned in 1903, when his ship was sunk in a hurricane off Florida. He left a widow and three daughters at Sea View, St. Bees.

I am grateful to Dorothy Walker of London, Maria McGill’s Great-Grandaughter, for much of the information about her – RTJ. 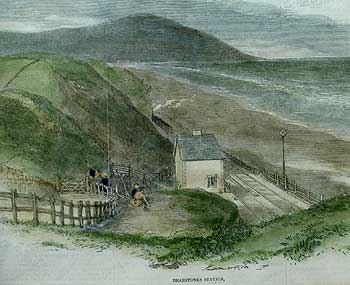 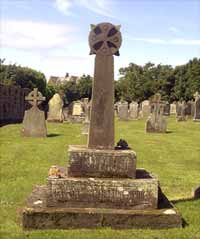 The monument to the seamen from the “Luigi Olivari”.

Although few in the village know the story behind it, it is still often called “The Sailors’ Grave”.
The shells have been on the monument for longer than anyone can remember.

he inscription around the base reads: