The use of distinctive academic hoods by alumni of theological colleges is an important part of the history of the study of academic and ecclesiastical dress. By the Fifty-eighth Canon of 1604,

It is far from plain exactly what this means. What exactly is a tippet? It has been argued to mean a black scarf, but equally persuasively to mean a simple black shoulder-cape, without a hood. The root of the trouble is that ‘tippet’ is used now to mean a number of things, and it is equally far from clear what it meant in 1604, either. However, at some point, the non-graduates (literates, to give them their correct name) had come to wear a black stuff hood, with no lining – the so-called ‘literate’s hood’.

The men trained in the theological colleges claimed, quite rightly, that they were not literates in the strict sense of the word (i.e. privately educated), but equally they were not graduates. For those colleges that took in graduates only (e.g. Wells, Cuddesdon) there was no problem – their students wore their degree hoods. For those that took in non-graduates, there was a feeling that their students should have some distinctive mark, and thus the theological college hood was born, and arguably the first was St Bees.

The College’s aspiration to full collegiate status is reflected in the fact that from the very start, students were required to wear caps and gowns, and that a hood was introduced for its alumni. (Several unsuccessful attempts were made to gain degree-awarding powers.) Thus far, no exact specification of the gown to be worn by students has come to light, but close inspection of various photographs of year groups seem to indicate it was a bell-sleeved gown, with the forearm seam left open – exactly the style used at St Bees’ great rival, St David’s College, Lampeter. The first hood is supposed to have been introduced in 1847, and designed by the then Principal, Richard Parkinson. It is quite certainly the first non-university hood to be awarded. It caused much adverse comment – some bishops even requiring it to be removed before they would ordain those wearing it!

A Modern reconstruction of the first hood (in the Cambridge shape) is shown.

It was certainly an eye-catching garment, being made in black, with a divided lining of red and white silk. It has been suggested that it was a conscious amalgam of the MA hoods of Oxford and Cambridge, which are lined with red and white respectively, but this is unlikely, as the commoner, (the ‘non-regent’) form of the Cambridge MA hood in use at that time was lined with black silk. However, Thomas Baty in his book Academic Colours (Tokyo, 1934) quotes the Principal who was supposed to have designed it (William Ainger?) as saying ‘Emulate the classical learning of Oxford and the mathematical acumen of Cambridge, and you will do!’. The red and white are in fact more possibly taken from the arms of Bishop Law, the founder.

It also caused a good deal of confusion. The magazine Notes and Queries of 13 October, 1866, has a letter from a clergyman who said he attended a church where the curate was wearing ‘what I presumed to be the hood of the Oxford MA. … to my surprise, he told me he was a St Bees man.’ A few Sundays later he took a Cambridge friend with him, and the white side of the hood was on display, ‘and the Cantab as positively claimed him as a member of that university’. It was worn with an MA-pattern gown, but with square ends to the sleeves, as was the hood for King’s College, London.

As was usual with many of the early theological colleges (though not the universities) the hood could be made in either the Oxford or the Cambridge shape, according to the wearer’s choice. Unlike Lampeter, where the Cambridge shape eventually became the fixed one, St Bees seems not to have made a permanent choice.

A Modern reconstruction of the first hood (in the Cambridge shape) is shown above.

In 1866, the hood was changed. The new hood was also black, but lined (and in some cases also bound) with violet silk. (In some descriptions, the lining said to be blue, but this is merely a convention for ‘blue-violet’, as opposed to ‘red-violet’, or purple.) What prompted the change is not known, but it may be significant that it happened in the College’s fiftiteth year – and also during the principalship of George Ainger, the son of the first Principal. This hood also caused identity problems, as it resembled (in its Oxford shape form) too much the MA hood of Durham, and was also very similar to the original AKC hood used by King’s College London. The gown was also changed, to the London undergraduate gown, with a black cord and button on the yoke. Many of the other colleges founded in the early nineteenth century also used black and violet hoods – King’s London; Queen’s Birmingham; Gloucester; and the original Chichester hood, which also had a fur trim. Lampeter used violet to line its BD hood in 1852, and both Aberdeen and Edinburgh used it for their Divinity hoods when they were reintroduced in the 1870s. 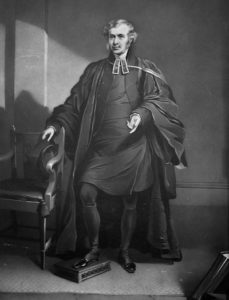 Canon Dr Parkinson was a graduate of St John’s Cambridge, BA (1820), MA (1824), BD (1838) and DD (1851). He is wearing the undress gown of the Cambridge DD, although the bell sleeves are often gathered together at the wrist. (The MA gown is frequently used instead, too.) The hood must therefore be the DD hood. Under it he is wearing the ‘apron and gaiters’ – i.e. the cut-down cassock, which is also part of the DD dress at Cambridge. The “Bands” are transparent; being a fine lawn material which was semi-transparent.

For more information on academical dress go to The Burgon Society 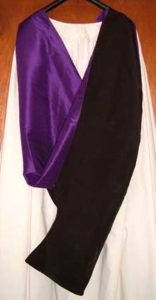 A reconstruction of the second hood – in the Oxford shape.

In 1882, the question of theological college hoods came under the notice of Convocation. As they were not degree hoods, it was, technically, illegal for them to be worn in church. Convocation issued a direction that henceforth all theological college hoods should be of black stuff, of Oxford or Cambridge shape, and with a border or binding, no more than two inches wide, of a colour. In common with most colleges, St Bees altered its hood. The violet lining was reduced to a border of two inches of violet silk, and this remained the hood used until the College closed in 1895. The ‘graduate’ gown remained the same.