he first Principal, Rev. William Ainger, was appointed in October 1816. Ainger had been educated at Sedbergh School and St. John’s College, Cambridge. He had been the Vicar of Beccles in Norfolk until 1813, when he returned as a Fellow to his old College of St. John’s. It is thought Law knew Ainger personally and approved of Ainger’s theological stance, and that Ainger was regarded as a safe pair of hands to guide the fledgling institution.

By 1817 the repair work was complete. The roofless monastic chancel was restored, and became the main lecture room for the College. News of the College opening soon spread, and the College opened to admit 20 students, who paid £5 a term. The Principal would also perform all the duties of the Vicar, but the College was privately financed, being effectively a business run by the Principal. The College had no accommodation, and students would lodge in the village. When it was apparent the College was going to succeed, private owners built houses just to cater for this demand. Numbers entering the College in its early days were very encouraging. St. Bees College was attractive because successful students had a very good chance of employment, particularly in the Diocese of Chester. In addition the cost of living and fees were much lower than at the two universities, and the course had a focus on producing clergy, rather than a BA.

The Priory Church itself was improved. Though parishioners had used the nave of the church, the West Door had been blocked off. Entrance had been through a porch on the north side. With the return of this land to the Church, the West Door was used from 1820. The West Gallery was built, and new centre pews installed. 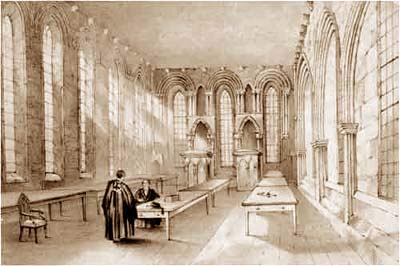 This view of 1843 shows the main lecture room of the College, now known as the”Old College Hall”. 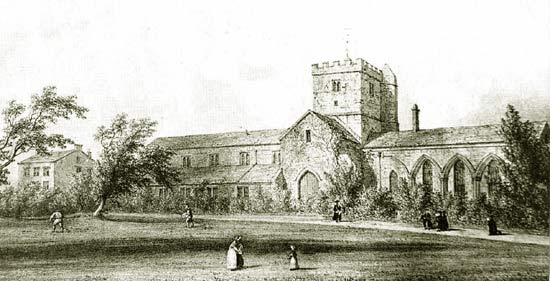 This engraving of 1840 shows the greatly improved state of the Priory. The College is on the right. The chimney marks the dividing wall between the main lecture room and the College Library. The students are seen in caps and gowns.

Although Ainger was only 31 when appointed, and had no previous experience of running a theological institution, the College prospered immediately, with numbers rising to 36 admissions in 1822. Ainger had to work alone until 1826, when the increasing scope of the training course obliged him to take on an assistant, Rev. Richard Parkinson, and to double the fees to £10 a term. Although Ainger also carried out all the duties of a parish priest, he had the time and energy to make the reputation of the College grow. Shortly before Ainger’s death in 1840 at the age of 55, St. Bees College was mentioned specifically in national legislation along with Oxford and Cambridge, Durham and St. David’s. It had arrived on the clerical map.

Ainger’s successor was the Rev. Richard Buddicom, aged 60, who had quite a different theological standpoint and came from the evangelical wing of the church. He was an early supporter of the Church Missionary Society, and was elected to the newly-built chapel of St. George’s, Everton, in 1813, where he remained until coming to St. Bees. He had published a large body of sermons and had a huge reputation as a preacher. When he preached for the first time in Whitehaven, over 3,000 people came to hear him. In Everton he had an impressive pastoral record, and at St. Bees his concerns were not limited to the College, but he took seriously his responsibility for Whitehaven with 20,000 people, which was still part of the ecclesiastical parish of St. Bees. Whitehaven had three chapels of ease; Trinity, St. James and St. Nicholas, each with a curate . But some 5,000 in Newtown had no chapel or clergy, and Buddicom’s efforts eventually obtained a curate for this deprived area.

Students were scattered around the parish, some as far away as Bell House farm, and lodgings ranged from 10 shillings for a single room to 28 shillings for a suite of family rooms; though these prices were much less than would be paid at the university towns. Students were obliged to wear a mortar board and gown in the village, and could obtain these at the post office, and standard text books could be bought at the chemist’s shop in the Main Street.

The course of study concentrated on proficiency in understanding the bible in Greek, Latin and English composition, and understanding basic Christian doctrines. Lectures were in the morning, and private study in the afternoon. For pastimes, walking was the most popular with steeple-chasing, athletic sports and cricket with the village club being other favourites.

Despite the founding of other theological colleges, some spurred on by the St. Bees example, St. Bees remained attractive because of its high standards and a good reputation for turning out reliable clergy. One commentator stated in 1872, “A St. Bees man has little chance of becoming Archbishop of Canterbury, but for more than half a century the quaint Cumberland College has turned out a very useful supply of hard-working clergy for the North of England and the Colonies”. In addition, St. Bees did succeed in opening its doors to the “humbler” classes. In the 1851 census only 4 of the 55 students described their fathers as “gentlemen”, but 19 were professionals, 17 in commerce, and 14 in farming, and one was the son of a St. Bees carpenter. There was a prejudice in certain quarters against other than clergy or gentlemen’s sons becoming clergy, but this was not evident at St. Bees. (See College Calendar for interesting requirements on students for admission and study).

With Buddicom the college prospered further, though his tenure was short; he died in 1846. His successor was Rev. Richard Parkinson, who had been a lecturer at the College until 1833, when he was appointed a Fellow of Manchester Collegiate church (now the Cathedral).