Under Parkinson, College admissions rose, and he set about schemes for improving the College and buildings. He proposed a plan to incorporate the College with a charter, so it could confer degrees, and build residential accommodation. Parkinson was a rich man, and offered to donate £5,000 personally. However, he would not surrender power to a proposed governing council of clergy and laity, and consequently the Church authorities and the Liberal Government would not support the scheme. Had the College progressed in this way, it may well have survived into the 20th Century. Instead, Parkinson applied his energies to extending the vicarage and improving the church. 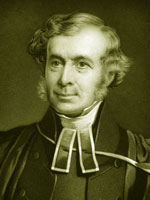 Canon Richard Parkinson was Principal at the height of the College’s popularity, but failed to bring the College into full management by the Church. 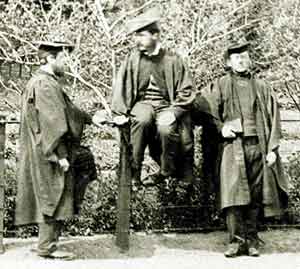 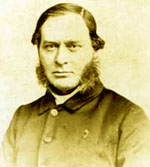 Rev’d George Henry Ainger, son of the first Principal, and himself Principal from 1857 to 1871. He saw the end of the great era of Priory rebuilding and College expansion.

The Parish Church itself was still restricted to the nave. With more college students (numbers in 1847 reached 100), and an increasing congregation due to a growing population, there was a shortage of space. The area under the tower and the transepts had been used as a lumber room and a library for the College. To create more space, Parkinson engaged one of the foremost architects of the day, William Butterfield, to restore the tower space and transepts. In 1855 a new floor was laid and the altar moved from the western to the eastern tower arch. The south transept wall was rebuilt and both transepts were re-roofed.

Canon Parkinson’s next project was installing a new ring of eight bells, but he died before they arrived in 1858, and his successor, Rev. G. H. Ainger, had the immediate task of getting the bells into the tower. The Rev. George Henry Ainger was the son of the first Principal, William Ainger, and was to be known as the great builder of the College and restorer of the Priory. The installation of bells meant re-modelling the tower, and Ainger used Butterfield, who produced a striking Romanesque spire.

The College continued to prosper, and during the 1860s annual admissions were frequently over 40. College life seems to have been particularly lively at this time, with many grand celebrations. There was a gala day at the Priory when Ainger was presented with a handsome portrait costing £100. The Militia band played, and a special train was put on from Whitehaven. On another occasion, the anniversary dinner of the College in 1862, no fewer than 25 toasts were proposed, which attracted the criticism of the Whitehaven Temperance Society.

The popularity of the College meant there had to be additional teaching facilities, and in 1863 a new building was completed to the design of Butterfield, to provide two large lecture rooms. This still stands to the south of the Priory and is known as the New College Hall.

1865 was a year of major restoration for the Priory. The north and south aisles were rebuilt, and the new windows liberally filled with stained glass depicting Old and New Testament scenes. The present chancel was built, allowing the altar to be moved to its present location. The side aisle box pews were replaced and the flat ceiling was removed.

Until 1863 singing in the church appears to have been unaccompanied, for in that year the 73 students petitioned for a harmonium. This sparked off plans to have a proper pipe organ, and later that year fund-raising was started. As a result, in 1868 the Priory got its first organ, built by William Hill & Son. The West Gallery was taken down and the new organ placed over the west door.

The era of grand occasions and church restoration ended with the departure of Ainger to Rothbury in 1871. His successor was Canon E. H. Knowles, who had been a mathematics and classics master at St. Bees school from 1843 to 1864, then headmaster of Kenilworth Grammar School. He had close ties with the College, having married Revd. G. H. Ainger’s sister. 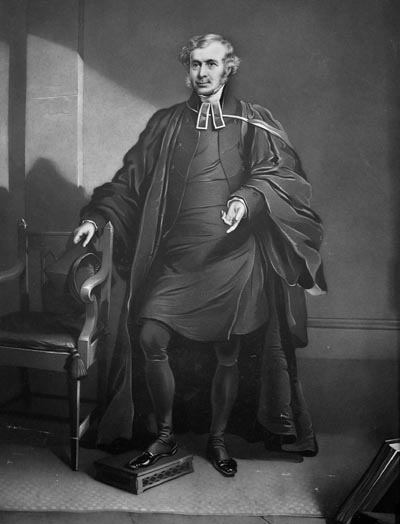 View of the Priory, Theological College and Grammar School about 1865. The vicarage on the left was enlarged and improved by Canon Parkinson, and the New College Hall (middle right) was built by G H Ainger to provide two extra lecture rooms. The School is hidden in the trees. The steep nave roof of the Priory was not added until 1870