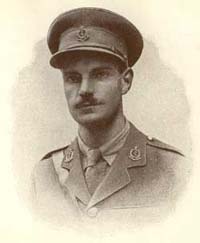 Capt. J. Fox-Russell, V.C., M.C., was killed in action in Palestine on November 6, 1917. At an early age, he passed the examination for a choristership at Magdalen College, Oxford, where he was educated for a few years before coming to St. Bees. When at School he was an enthusiastic member of the Cadet Corps. He joined the Middlesex Hospital when only sixteen years of age.

While in London he joined the London University O.T.C., and in 1914 obtained a commission in the Royal Welsh Fusiliers, and was with them in camp when war was declared. Being anxious to qualify, he was seconded in order to complete his medical studies. After obtaining his degrees, he joined the R.A.M.C., and was attached to a battery of the R.F.A. Later he re-joined his old regiment and went out to Egypt as M.O. In the first battle of Gaza he won the Military Cross. He was also awarded the Victoria Cross ‘ for most conspicuous bravery displayed in action. Until he was killed, he repeatedly went out to attend the wounded under murderous fire from snipers and machine-guns, and in many cases, when no other means were at hand, carried them in himself, although almost exhausted. He showed the greatest possible degree of valour.

From “Roll of Honour and Record of Service” 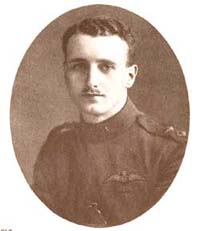 Capt. W. L. Robinson, V.C., R.A.F., came to St. Bees in September 1908, with his elder brother, H. L. Robinson, who fell in Mesopotamia (1916). He succeeded his brother as Head of Eaglesfield House in 1913, and in addition to being a useful member of the 1st XV, he was a sergeant in the O.T.C. and a School Prefect. He entered Sandhurst in August 1914, was gazetted to the Worcestershire Regiment in December, and went to France in the R.A.F. (to which he had transferred) in the following March.

As an observer he was wounded in the arm while flying over Lille. He returned to England, qualified as pilot in September, and after being attached to various stations in England for night flying, he brought down the first Zeppelin at Cuffley, September 3, 1916. For this he was awarded the V.C. – the first of our Old Boys to win this distinction.

He then went to the Western Front, and in May 1917 was a prisoner in Germany. Here he suffered all the brutalities which the enemy were capable of inflicting, aggravated by the fact that he made several determined efforts to escape. He was in prison at Zorndorf, Holzminden, and other places, and was kept in solitary confinement at the latter camp. The hardships he suffered, and the want of proper food – he seems to have been moved about at the time his parcels were due to arrive – so undermined his health that he fell a victim to influenza shortly after his repatriation, December 14, 1918. He died near Harrow, at the house of his sister, Baroness Heyking, on the last day of December, and was interred at All Saints, Harrow Weald. He stands out as one of the heroic figures among those who have made the great sacrifice in the war; tried, and not found wanting.

The text above from the St. Bees School “Roll of Honour and Record of Service” prosaically describes one of the more memorable acts of bravery in the war. The destruction of the airship was witnessed by tens of thousands of people living in the Cuffley area, and the next day thousands flocked to the see the wreckage of the airship. Leefe-Robinson became a household name overnight and his exploits, being so close to home, received huge press attention. He was the first member of the R.F.C. to win a V.C.

The text above has some slight enthusiastic inaccuracies. The airship was referred to in the account as a Zeppelin, but actually was a “Schutte Lanz” (SL) airship; but it had the same effect in posing a serious bombing threat to London; the birth of strategic bombing. Also, it was not the first airship to be brought down by an aircraft, this was in June 1915 when Rex Warneford of the RNAS, bombed an airship in flight over Belgium, for which he also received the V.C.

However, Leefe-Robinson’s feat was at night, and over Britain, and had considerable significance. It was the first enemy aircraft to be brought down over Britain, and it showed that airships on night raids were not invincible. This had a marked effect on the morale of airship crews which reduced their confidence to roam at will, and boosted the morale of the RFC night fighters. His was the first V.C. to be awarded in fighting in the British Isles.

His combat report, reproduced below, gives more colour to his actions.

From: Lieutenant Leefe-Robinson,
Sutton’s Farm.
To: The Officer Commanding
No. 39 H. D. Squadron.

I climbed to 10,000 feet in fifty-three minutes. I counted what I thought were ten sets of flares – there were a few clouds below me, but on the whole it was a beautifully clear night. I saw nothing until 1.10 a.m., when two searchlights picked up a Zeppelin S.E. of Woolwich. The clouds had collected in this quarter and the searchlights had some difficulty in keeping on the airship. By this time I had managed to climb to 12,000 feet and I made in the direction of the Zeppelin – which was being fired on by a few anti-aircraft guns – hoping to cut it off on its way eastward. I very slowly gained on it for about ten minutes. I judged it to be about 800 feet below me and I sacrificed some speed in order to keep the height. It went behind some clouds, avoiding the searchlight, and I lost sight of it. After fifteen minutes of fruitless search I returned to my patrol.

I managed to pick up and distinguish my flares again. At about 1.50 a.m. I noticed a red glow in the N.E. of London. Taking it to be an outbreak of fire, I went in that direction. At 2.05 a Zeppelin was picked up by the searchlights over N.N.E. London (as far as I could judge).

Remembering my last failure, I sacrificed height (I was at about 12,900 feet) for speed and nosed down in the direction of the Zeppelin. I saw shells bursting and night tracers flying around it. When I drew closer I noticed that the anti- aircraft aim was too high or too low; also a good many shells burst about 800 feet behind-a few tracers went right over. I could hear the bursts when about 3,000 feet from the Zeppelin. I flew about 800 feet below it from bow to stem and distributed one drum among it (alternate New Brock and Pomeroy). It seemed to have no effect; I therefore moved to one side and gave them another drum along the side – also without effect. I then got behind it and by this time I was very close – 500 feet or less below, and concentrated one drum on one part (underneath rear). I was then at a height of 11,500 feet when attacking the Zeppelin.

I had hardly finished the drum before I saw the part fired at, glow. In a few seconds the whole rear part was blazing. When the third drum was fired, there were no searchlights on the Zeppelin, and no anti-aircraft was firing. I quickly got out of the way of the falling, blazing Zeppelin and, being very excited, fired off a few red Very lights and dropped a parachute flare.

Having little oil or petrol left, I returned to Sutton’s Farm, landing at 2.45 a.m. On landing, I found the Zeppelin gunners had shot away the machine-gun wire guard, the rear part of my centre section, and had pierced the main spar several times.

I have the honour to be, sir,
Your obedient servant,
(Signed) W. Leefe-Robinson, Lieutenant
No. 39 H. D. Squadron. 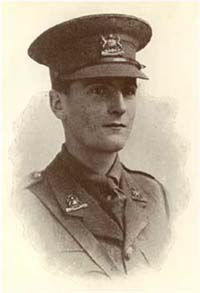 Capt. R. W. L. Wain, V.C., Tanks Corps, was killed in action on November 20, 1917. He came from Llandaff Cathedral School and was at the School House, 1911-14. He was the holder of a House Scholarship, which he won from his Preparatory School, and it was not long before he found his way into the Sixth, and gained the Higher Certificate of the Oxford and Cambridge Joint Board. He was destined for Oxford, where it was hoped he might win a scholarship, but the declaration of war put such a career out of the question.

He was one of the first to volunteer, and joined the Public Schools Battalion, from which he was gazetted to a commission in the Manchester Regiment. With them he took part in the battle of the Somme, and was one of the few who survived, though wounded, the glorious charge of the Manchesters on the 1st of July 1916, when Capt. Ford and Capt. Kenworthy were killed. While on sick leave he visited St. Bees for the last time, and then joined the Tank Corps, in which he won his V.C., and alas! lost his life.

The incident was described in the London Gazette as follows:- ‘For most conspicuous bravery in command of a section of tanks. During an attack the tank in which he was, was disabled by a direct hit, near an enemy strong point which was holding up the attack. Capt. Wain and one man, both seriously wounded, were the only survivors. Though bleeding profusely from his wounds, he refused the attention of stretcher-bearers, rushed from behind the tank with a Lewis gun, and captured the strong point, taking about half the garrison prisoners. Although his wounds were very serious, he picked up a rifle and continued to fire at the retreating enemy until he received a fatal wound in the head. It was due to the valour displayed by Capt. Wain that the infantry were able to advance.’

From “Roll of Honour and Record of Service”.

He is also commemorated at the Tank Museum in Bovingdon, Dorset. he was the second member of the Royal Tank Corps to win the VC.