Wainwright's Coast to Coast and other walks

St Bees is the start of the Wainwright Coast to Coast Walk, devised by Alfred Wainwright in 1973

The start of the Walk is the “Wainwright Wall” by the Lifeboat Station.  There is an updated interpretation board and steel banner installed  by the Parish Council and the Wainwright Society. A few yards away is the boat ramp which makes it easy to access the beach to dip your boots in the water – as Wainwright suggested in his guide. Be sure to do the same at Robin Hood’s Bay. Now you start to walk up the Heads – Westwards to start with!

Coast to Coast – Setting out from the village centre

If you have time visit the historic Priory, and  the extensive history displays, including the original Wainwright Coast to Coast board. The St Bees History Group can also offer short talks about St Bees history and the story of St Bees Man by prior arrangement.  Contact Chris Robson on 01946 822468 (email: icrobson1938@gmail.com).

Coast to Coast to be made a National Trail

The Coast to Coast walk from St Bees to Robin Hood’s Bay was the personal, but hugely successful, creation of Alfred Wainwright, but was never a national trail like the Pennine Way or Offa’s Dyke. However it is now to become a National Trail, and Natural England has begun work to upgrade it.  It will join 15 other long distance routes in England and Wales as a National Trail and receive public funding for path maintenance, signposting and promotion.

A collection of eight circular walks, starting and finishing in the village and following public footpaths, the ECP,  and quiet roads, has been created by the Parish Council, and first issued in 1997.

They are available in print from St Bees Post Office or as a pdf download from this page. They have all been revised in 2021, and No.8, a walk around the parish boundary, has been added.

The guides contain  maps of the routes and describe the historical and geographic features to be seen.

Adobe pdf versions are available to download by clicking on links below. All walks revised May 2021. They print out A4 size and can be folded A5 for convenience. 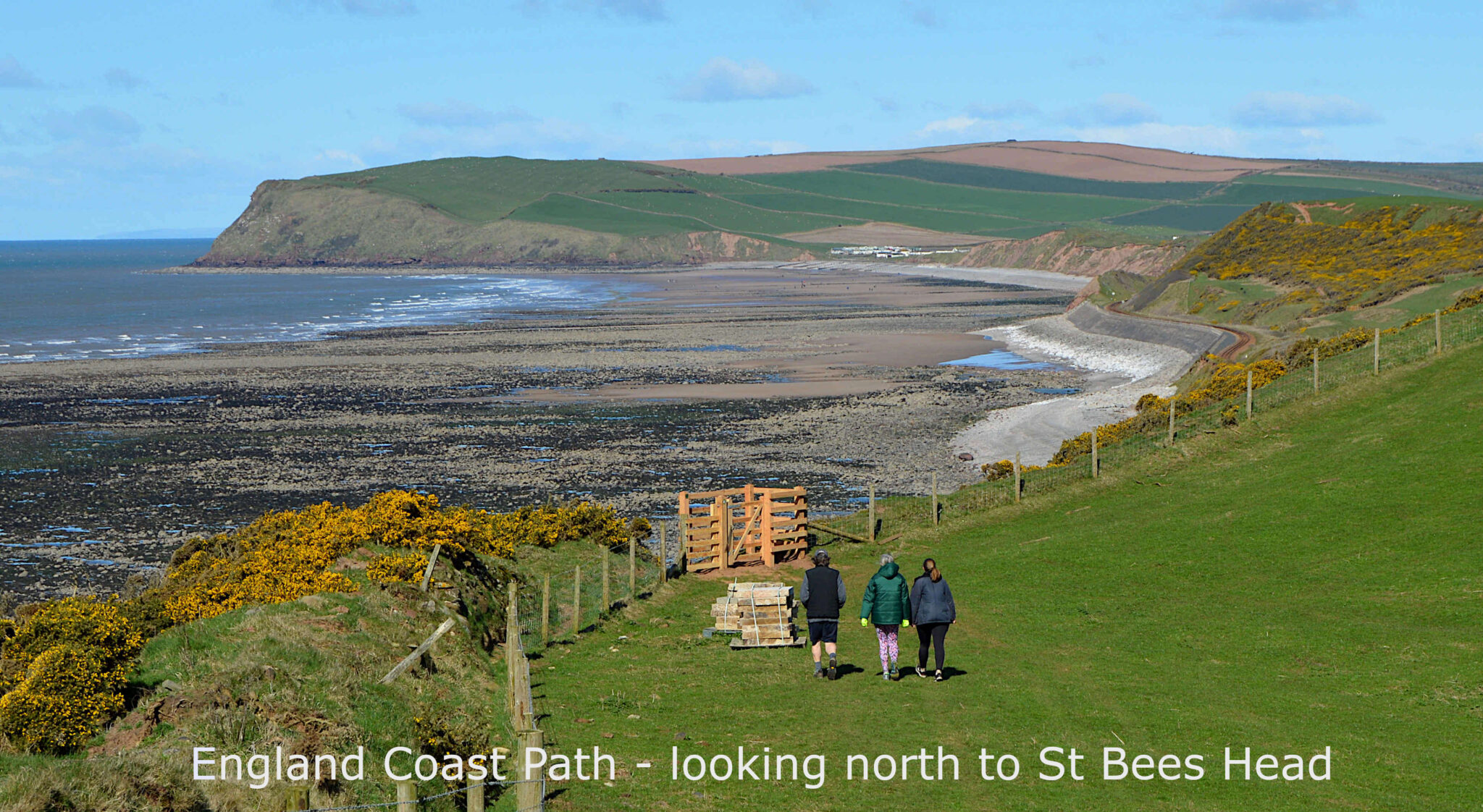 As from 31st March 2021 the ECP is officially open from Whitehaven To Silecroft; it is a National Trail constructed and managed by Natural England.

South from Seamill car park the ECP goes under the railway and immediately to the right to Lovers Lonning, where it branches off to Primrose Valley following the landward side of the railway line. This is a spectacular portion of the coast, which has not had public access until this year.

South of St Bees the route next goes to Nethertown, and eventually to Silecroft.

PLEASE KEEP DOGS UNDER CONTROL on all walks through fields with livestock.