St Bees is a mandatory stop on the Cumbrian Coast Line which runs between Carlisle and Barrow. There are about 30 trains on weekdays, and there is a lesser Sunday service.The station is in the centre of the village and has a free car park, passenger shelters, CCTV, a ticket machine and electronic timetables. The post code is CA27 0BZ. Usage has been significantly increasing; there was a 26% annual increase before COVID, to about 80,000 journeys a year.

West Coast Mainline train to Carlisle, from cities north and south, or cross England from Newcastle. Then Cumbrian coast line to St Bees. A few Carlisle trains terminate at Whitehaven, so look at the timetable. Most are direct to St Bees.

From the South
From the South you can travel via Barrow-in-Furness, with some through trains starting from Preston or Lancaster. Otherwise change at Lancaster or Preston for Barrow. There are direct trains from Manchester Airport to Carlisle and Barrow. The fastest West Coast Main Line time (125 mph Pendolino service) is now down to just over 3 hours London-Carlisle. Times from the south vary only by minutes between the Barrow and Carlisle routes.

The most picturesque route is via Barrow, the Lake District Peninsulas and the Western Lakes coastal strip; the journey itself in an experience. The railway crosses the estuaries of southern Lakeland, and there are marvellous views of the Lakeland fells. Near St. Bees the scenery changes and the track is almost running along the beach for the last few miles. There are amazing seascapes from the carriage window as St Bees is approached. (see video below)

3. Change at Barrow, Preston or Lancaster for St. Bees from the south.

4. Manchester Airport trains go direct to Barrow or Carlisle via Lancaster. Change at any of these for St Bees. 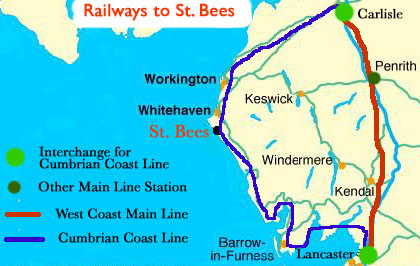